2060 Chiron (pronounced "ky'-rahn," not "cheer-un") is a planetoid in the outer Solar System. Discovered in 1977 by Charles T. Kowal,it was the first known member of a new class of objects now known as "centaurs," which have orbits between the giant planets, such as Saturn and Uranus, and have lifetimes of a few million years. 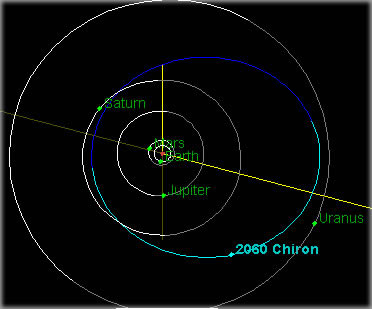 Although it was initially classified as an asteroid, Chiron was later found to exhibit behaviour typical of a comet. Today it is classified as both (one of three found to display a coma) and accordingly it is also known by the cometary designation 95P.

Chiron is named after the centaur in Greek mythology, and should not be confused with the Plutonian moon Charon, discovered in 1978. No centaur has been photographed up close, although there is evidence that Saturn's moon Phoebe, imaged by the Cassini probe in 2004, may be a captured centaur. In addition, the Hubble Space Telescope has gleaned some information about the surface features of 8405 Asbolus.

Chiron has an unstable and eccentric orbit as seen in this gravity simulated animation. I think this kind of thing is cool, and am amazed how astronomers can figure this stuff out from 746 million miles away.

In Greek mythology, Chiron was the superlative Centaur; he was more intelligent than most of the others, and also much kinder. Whereas most of the other centaurs were savage warriors, Chiron was a teacher and a doctor, as well as immortal. The wound of Chiron's perpetual suffering was accidentally inflicted by Hercules' poisoned arrow. Because Chiron could not die, he lived out each day in agony. Zeus, however, agreed that Chiron could exchange places with the rebellious Prometheus, who had been chained to a rock for stealing fire and giving it to mankind. Chiron took his place so that humanity could keep the fire and Promethous could be freed from his eternal punishment of having his liver eaten by eagles everyday. Having chosen death to end his suffering, Chiron was honoured in the sky as the constellation of Sagittarius.

Popularly called "The Wounded Healer," Chiron (a near anagram of "chronic") is said to represent one's constant burden and pain that ultimately becomes wisdom and a capacity to help others. Chiron represents the nexus between experience, education, and change.

The glyph of Chiron resembles a key, symbolic of that which unlocks doors to different dimensions. Personally, the first dimension I'd like to unlock is the one called "A Better Life." Having faithfully served my sentence in hell doesn't mean they'll let me out early for good behavior. All prisoners dream about life on the outside. For me it's a creative place where I can express my identity.